It is easy to use and reliable. The GoingStick is a valuable tool when determining watering regimes

Having used the GoingStick extensively since 2003, I would have no hesitation in strongly recommending its use to Racecourses around the World

In November 2000, the UK Horseracing Regulator asked TurfTrax to create a device for the systematic and objective assessment of going conditions on British racecourses.

The state of the ground directly affects the trainer/owner decision to run a horse in a particular race and the requirement for an objective measurement was driven by long term frustrations regarding the accuracy and consistency of reports published by courses.

The Regulator's approach to TurfTrax followed a 10 year search for an appropriate solution and recognised the company's specific expertise in soil physics/sports turf management.

TurfTrax works closely with some of the UK's leading soil scientists and in collaboration with Cranfield University produced a device known as the GoingStick. After design and extensive testing in the controlled environment of Cranfield's unique soil laboratory facilities, live on-course trials started in late 2001.

Testing and calibration of the device involved all 59 UK racecourses. Over 100,000 unique measurements were taken covering all ground conditions and these were compared and analysed against the subjective assessments made by the Regulator's officials and experienced course representatives.

Under the British Horseracing Authority rules of racing all UK turf racecourses are now required to issue GoingStick readings. 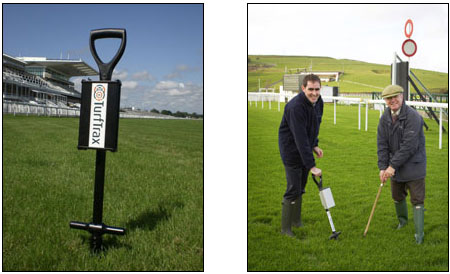 The GoingStick accurately measures the penetration (the amount of force required to push the tip into the ground) and the shear (the energy needed to pull back to an angle of 45 degrees from the ground). These two measures taken in combination represent a scientifically based proxy for the firmness of the ground and level of traction experienced by a horse during a race.

The information is automatically stored in the GoingStick memory and an average of all readings can be provided instantly.

From March 2007 all UK turf racecourses were required to issue a GoingStick reading with their Official pre declaration and race day Going report. The GoingStick has been used to assess Going conditions at the following high profile races and race meetings since 2003 including every 'Classic' race run in Britain:

Worldwide interest in the GoingStick continues to develop and the device is now being used by customers in France, Hong Kong, Australia, New Zealand, Sweden, Norway and the USA.

Use of the GoingStick is not restricted to Turf Horseracing; an All Weather setting is being developed and the stick can be modified if necessary for use on any sporting surface.The GoingStick package includes: TurfTrax download software, download lead, charger, instruction manual and a carrying case.